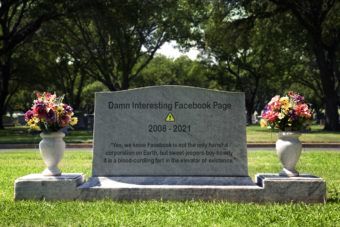 The earliest known version of the idiom “the straw that broke the camel’s back” was written by the English philosopher Thomas Hobbes of Malmesbury in 1677, though it was concerned with horses and feathers:

“The last Dictate of the Judgement, concerning the Good or Bad, that may follow on any Action, is not properly the whole Cause, but the last Part of it, and yet may be said to produce the Effect necessarily, in such Manner as the last Feather may be said to break a Horses Back, when there were so many laid on before as there want but that one to do it.”

For the past few years, we at Damn Interesting have been hearing from scores of long-time fans who were under the mistaken impression that we had ceased all operations years ago. These fans are typically delighted to hear that a) we are still writing and podcasting; and b) there is a wealth of new content since they last visited. When we ask them what caused the assumption of our demise, they invariably cite the fact that our posts disappeared from their Facebook news feeds.

This trend roughly coincides with Facebook’s introduction of “boosting” for pages; in this new model, according to the stats we can see, Facebook stopped showing our posts to approximately 94% of our followers, demanding a fee to “boost” each post into an ad, which would make it visible to more of our audience. We lost contact with tens of thousands of fans practically overnight. We don’t mind paying for a service if it is valuable, but we absolutely don’t want to reach our audience by buying ad space on Facebook. Yuck. But no other option is given to reach the many people who previously followed our posts, and who presumably want to continue to do so.

We established our Facebook page in 2008 as the fledgling social media site was gaining in currency, and we continued to maintain our page on the side, mostly as an afterthought. In the intervening years Facebook evolved from a dubious curiosity into a megacorporation that is firmly in the service of bad ideas. In a move that feels long overdue, we at Damn Interesting are abandoning all interactions and connections with Facebook.

This entry originally appeared at www.damninteresting.com/to-h-e-double-hockey-sticks-with-facebook, and may be a summary or abridged version.