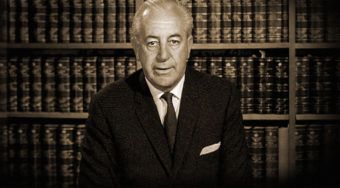 On 17 December 1967, Harold Holt–at that time the Prime Minister of Australia–decided to go for a swim. He and his traveling companions were passing near Cheviot Beach, one of Prime Minister Holt’s long-time favorite swimming and snorkeling locations. The water was a little rough that day, but Holt was a strong swimmer, and he dove into the ocean with confidence. As he swam away from the beach, his companions ashore watched as a current dragged him out to sea “like a leaf.” They called out to him, but he did not respond or show distress. However he soon slipped under the waves and out of sight. His friends sent out an alarm.

The people of Australia mounted one of the largest search operations in the history of their country–consisting of police, Royal Australian Navy divers, Royal Australian Air Force helicopters, Army personnel, and local volunteers. Nevertheless, neither the prime minister nor any clue about his fate were ever found. Australia became the only country in recorded history to have permanently misplaced their head of government. At the time of his disappearance, he had been prime minister for almost two years.

Many conspiracy theories arose regarding the disappearance, including CIA assassination, defection to China via submarine, and suicide, but no evidence has ever been found to support these speculations.

Today, a commemorative plaque marks the approximate spot of his disappearance, attached to a reef under 50 feet of water. The Harold Holt Swim Centre in Melbourne was named in his honor.

Editor’s note: An earlier version of this curio misstated that the Prime Minister of Australia is the ‘head of state’ rather than ‘head of government’.

This entry originally appeared at www.damninteresting.com/curio/it-makes-ones-head-swim, and may be a summary or abridged version.