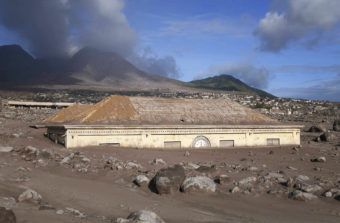 Located 350 km (217 miles) southeast of Puerto Rico, the British island of Montserrat is sometimes called ‘The Emerald Isle of the Caribbean’ for its verdancy and early Irish settlers. However, far from a paradise, Montserrat also boasts an unfortunate history, and not just because of the British slave trade that brutally ensnared many ancestors of the present population. The island has been a magnet for natural disasters. An earthquake in 1843 caused widespread devastation, then major hurricanes pummelled Montserrat in 1899 and 1989.

In mid-1995, the volcano at the heart of the island began releasing steam and gas. On 25 June 1997, it started rumbling ominously and flinging enormous boulders miles into the air. On 4 August, the volcano let loose with a full-fledged eruption, and the government sent evacuation orders to hundreds of people living below it. Clouds of smoke, lava, and ash gushed out of the volcano. The pyroclastic flow enveloped the capital city of Plymouth and 20 smaller towns, burying them in an obstinate stew of geological ingredients and killing at least 19 people. The southern two-thirds of Montserrat was rendered uninhabitable and marked as an exclusion zone.

The eruption wiped out the island’s capital, the one airport, the one seaport, and most of the agriculture. Montserrat’s government took refuge in the remote northern town of Brades. The island’s population, which had reached about 12,000 by the mid-1990s, fell by more than half as locals fled, many becoming permanent residents or citizens of the United Kingdom. Tourism took a huge hit, both because conditions were much more hazardous and the island was much less accessible without an airport or seaport. A few extreme adventure-seekers were undeterred, but the volcano kept rumbling; a 2003 eruption set off a tsunami.

A new airport in northern Montserrat opened in 2005. With support from the British government (and Beatles producer George Martin, who had owned an internationally known recording studio on the island), Montserrat has been building a replacement capital and seaport at Little Bay. The volcano has been quiet since 2010. However, even as of 2021, the island’s population is only about 5,000. Most of the southern end of Montserrat remains off-limits or dangerous, or both. Plymouth is unsalvageable, but the abandoned town is still the legal capital of the island, even with a population of 0.

This entry originally appeared at www.damninteresting.com/curio/capital-punished, and may be a summary or abridged version.