One Small Step for a Man 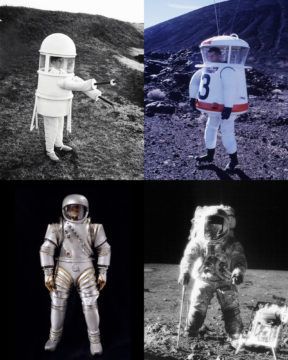 During the development of the Apollo moon missions in the early 1960s, the newfangled government agency called “NASA” put out a call for engineering firms to submit proposals for the design and construction of the Apollo “Extravehicular Mobility Unit”–the space suit. Nothing quite like a moon survival suit had ever been built before, so there was considerable variation among the slapdash prototypes that trickled in.

The design deemed most promising by the engineers at NASA–the one which ultimately won the contract–was submitted by Playtex, the widely known manufacturer of women’s bras and girdles. Their institutional knowledge in the domain of rubberized fabrics and clothing led to the most flexible and lightweight of the space suit designs. Every space suit used by the Apollo astronauts on the moon was sewn by hand by the Playtex seamstresses.

This entry originally appeared at feedproxy.google.com/~r/damninteresting/all/~3/ycNkLYthh3E, and may be a summary or abridged version.