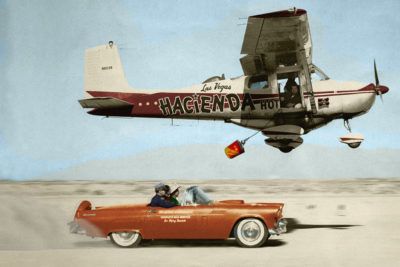 Warren “Doc” Bayley was a man of the people. When he and his wife Judy opened their Las Vegas resort in 1956, Bayley had no plans to compete with the flashier, corporate casinos at the center of the Strip. Instead, the Hacienda Hotel catered to families, as well as to locals who wanted a night out minus the tourists. When connoisseurs sneered, “You can either go to Las Vegas or to the Hacienda,” Bayley embraced the distinction with pride, and he didn’t even mind when the nickname “Hayseed Heaven” took hold. Hayseeds were hard-working folks who deserved a vacation, too, and his steady bookings proved it.

But margins were low, and Bayley was always on the lookout for new ways to drum up publicity for his so-called “low roller” operation. He didn’t care where the ideas came from. Staff at the Hacienda were considered family, and Bayley regularly asked the advice of maids, bellboys, cooks, and anyone else who might have something useful to offer. So when a slot machine mechanic and former Army pilot named Bob Timm suggested breaking a world record—specifically, the world record for the longest endurance flight in a piloted plane—Bayley was willing to listen.

This entry originally appeared at feedproxy.google.com/~r/damninteresting/all/~3/xl5VyPFd39c, and may be a summary or abridged version.