“Article the Second” was a single-sentence amendment written by James Madison in 1789, intended to be added to the United States Constitution. It reads:

No law, varying the compensation for the services of the Senators and Representatives, shall take effect, until an election of Representatives shall have intervened.

…which is to say, Congress’s decisions to change their own salaries cannot take effect until after the next election of members of the House of Representatives. Although it was submitted to the states for ratification in September 1789, the original 13 states seemed uninterested in fettering congressional pay raises. In the first two years, only two states ratified Article the Second, so it was not added to the Constitution. In the years that followed, as new states were gradually added to the Union, Article the Second was essentially forgotten. One notable exception was Ohio, which ratified the amendment in 1873 as a protest against the Legislative, Executive, and Judicial Expenses Appropriation Act–known by the nickname “Salary Grab Act”–where Congress voted to grant themselves a huge, retroactive pay raise. This is exactly the sort of behavior the amendment was intended to prevent. 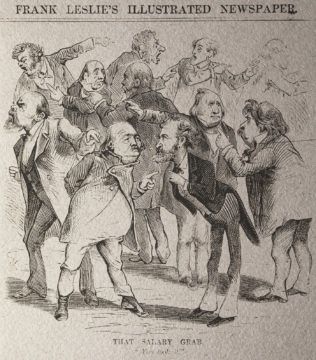 Over a century later, in 1982, University of Texas undergraduate student Gregory Watson discovered the long-neglected amendment, and he wrote a class research paper arguing that it could still be legally ratified despite its age. Watson received a “C” on his paper, his instructor dismissing the idea as “unrealistic.” Watson subsequently launched a letter-writing campaign to U.S. state legislatures. Within 10 years, enough states had ratified the amendment for it to be certified. On 18 May 1992, amid considerable impotent protest from congresspeople, Article the Second became the 27th Amendment to the United States Constitution, officially certified by the Archivist of the United States after spending 202 years in limbo.

This entry originally appeared at feedproxy.google.com/~r/damninteresting/all/~3/pNcd4uF714s, and may be a summary or abridged version.