Buzzing on the Green 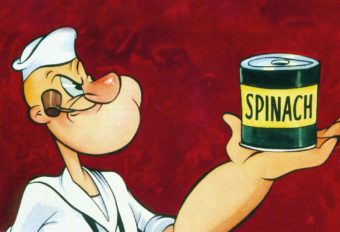 Popeye the Sailor is well known for his penchant for spinach, and the popularity of the character led to generations of children being force-fed often-overcooked greens of that variety in the hopes of their growing up strong. Though spinach does not lack in nutritional value, particularly when raw, it is to be questioned how many doting mothers were aware that Popeye’s spinach is actually a joke, and that the vegetable represents cocaine — a drug very popular in the creative milieu that spawned Popeye, and whose effects include immediate increases in strength.

Though this may have begun as a jest at the expense of the benighted rubes of farmland America on the part of weary sophisticates who were well aware of the sailor’s favourite green’s true semiotic signification, cocaine can be said to have greatly aided the spinach industry, as sales of the green tripled during the years of Popeye’s initial fame–and doubled again once frozen spinach became readily available.

This entry originally appeared at feedproxy.google.com/~r/damninteresting/all/~3/krlUB-x-g9U, and may be a summary or abridged version.