The Trouble with Triples 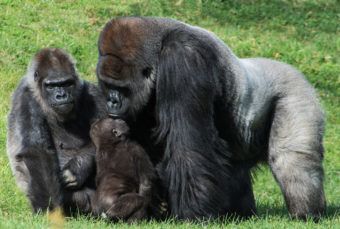 What do the American bison, western gorilla, and Eurasian eagle-owl have in common? One answer is that they are all species whose scientific names are tautonyms: that is, consisting of a pair of repeated words: Bison bison, Gorilla gorilla, and Bubo bubo respectively. Bubo-eyed zoologists may spot a more interesting connection, however: their study revealed subspecies subsequently named with a much rarer triple tautonym. Hence Bison bison bison is the Plains bison; Gorilla gorilla gorilla the western lowland gorilla; and Bubo bubo bubo the Eurasian eagle-owl.

“Triple tautonyms are hard to find,” Edward R. Wolpow wrote in a 1983 issue of Word Ways. Struggling to find examples beyond cha-cha-cha and tat-tat-tat in common use, Wolpow plundered the scientific literature to compile a list of 14 zoological triple tautonyms to fill his column inches. These included the beautifully named Redunca redunca redunca (the Bohor reedbuck) and Crossoptilon crossoptilon crossoptilon (the Szechuan white-eared pheasant). “There seems little doubt that careful search in specialized biology books and current literature will yield many hundreds of binomial tautonyms, as well as many trinomials,” Wolpow predicted, but so far this seems not to be the case. Even today, Wikipedia records only 25 examples of triple tautonyms.

Wolpow’s article also cites botany, if only to illustrate scientific naming more generally. We can only hope that he did not spend long scouring botanical works for tautonyms, as both double and triple varieties were banned in the naming of botanical species at the second International Botanical Congress in Vienna in 1905. Needless to say, creative spelling occasionally bends the rule to breaking point, as in the case of cumin, or Cuminum cyminum in the scientific vernacular.

This entry originally appeared at feedproxy.google.com/~r/damninteresting/all/~3/b_BQwhUSIxc, and may be a summary or abridged version.