In February of 2014, I discovered KSP Interstellar, which adds a broad array of hypothetical technologies to Kerbal Space Program. For instance, you can attach a small nuclear reactor to a thermal nozzle, and fly a small plane for several years continuously, using only air for fuel. 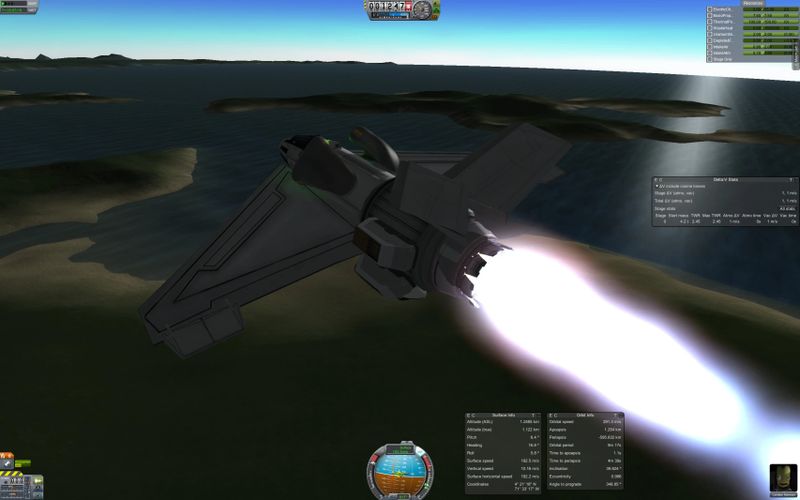 Believe it or not, this is something we actually thought about doing. We didn’t, because crashes would cover the landscape in radioactive fallout. Kerbals, however, like to live dangerously.

In Interstellar, you manage electric and thermal power. Rockets and jet engines can be attached directly to nuclear fission (and eventually, fusion & antimatter) reactors of various sizes and with varying fuel processes to leverage their heat for propulsion. You can also attach generators to reactors to obtain electric power, which can run various types of electric rocket engines. The difficulty is what to do with the waste heat; all that nuclear power has to go somewhere. In the plane above, small radiator modules are located around the reactor core, and use airflow for convective cooling. In space, however, we have no medium for convection, and must rely on direct radiative cooling. 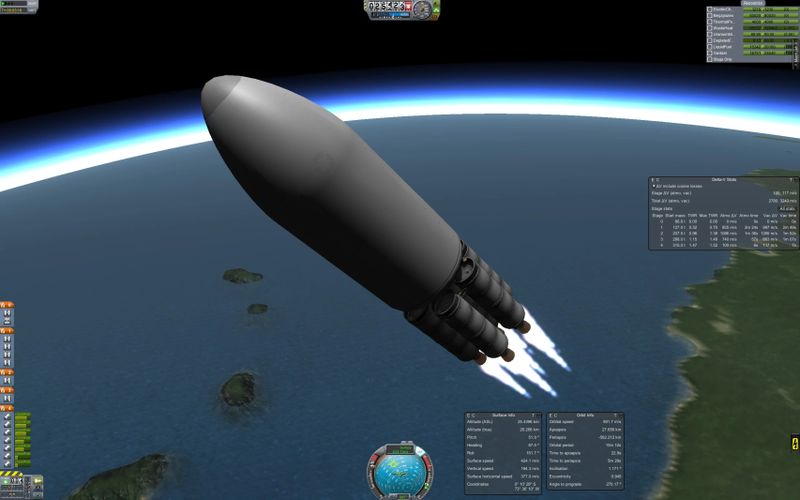 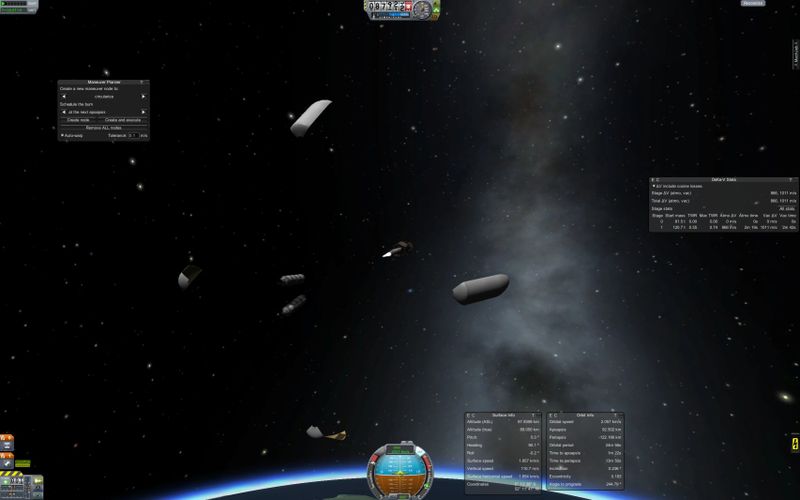 The fins have to be big. Real big. Because they’re so big, they’d snap under atmospheric forces, so we have to fold them up for launch & reentry. 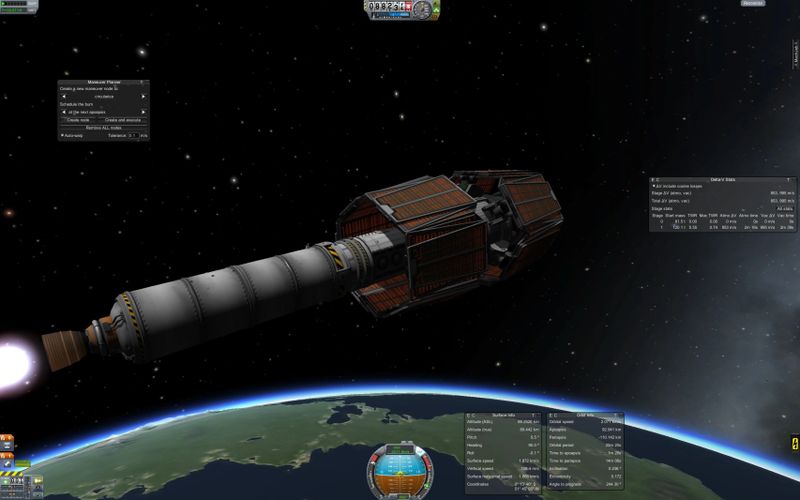 Once in space, the fins can unfurl to their full glory. The dim red glow is the hot coolant fluid from the electric generator, which circulates through the fins, shedding heat to space. 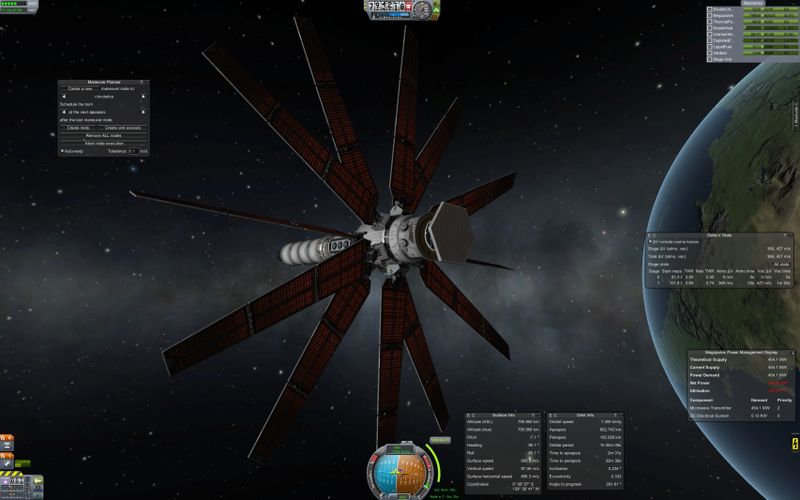 This station also carries a hexagonal microwave transceiver, which can either beam or receive power from other microwave transceivers in the network. In essence, this station is an orbital fission power plant, capable of delivering microwave energy to small craft anywhere in line-of-sight. Since carrying power generation equipment (reactors, generators, etc) is expensive, we can build more efficient ion-engine probes by leaving all that out, and relying on the microwave network for our power needs.

Unfortunately, this didn’t generate enough power to be interesting, so I moved on to other things. 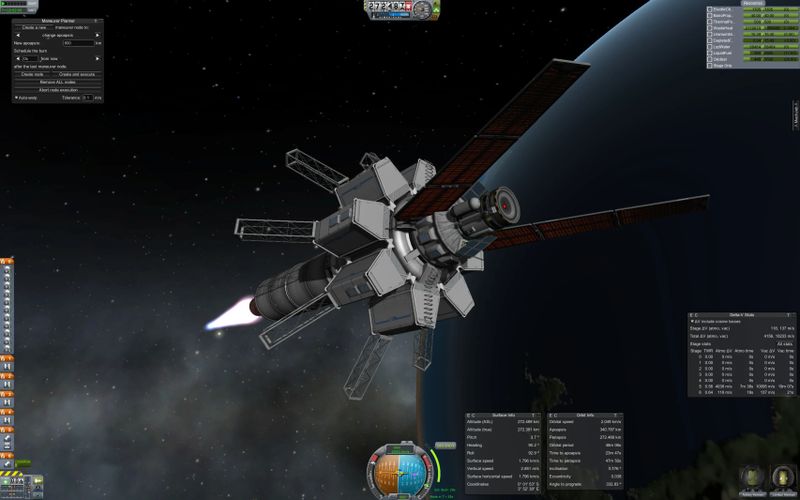 One of the interesting things about nuclear engines is that the fuel can be basically anything; we don’t have to carry chemically reactive fuel and oxidizer like a traditional rocket. This craft has eight radially-symmetric water tanks surrounding a fission reactor, which feed a single thermal rocket nozzle. 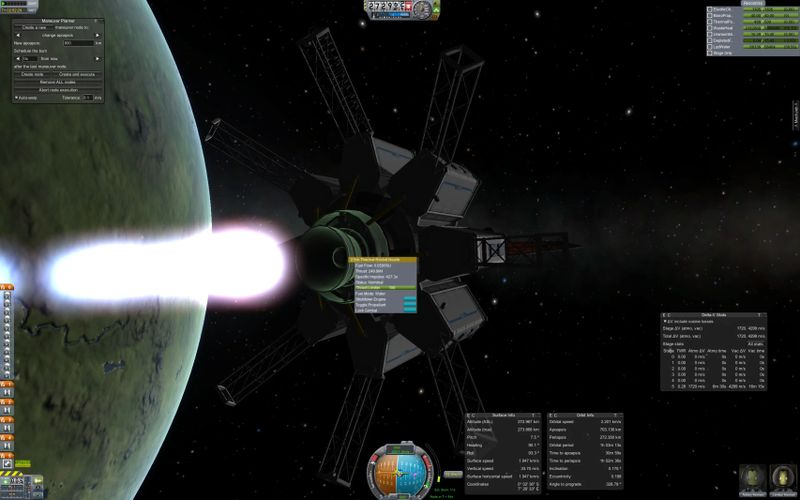 To conserve mass along the journey, we jettison tanks in pairs once their water is exhausted. 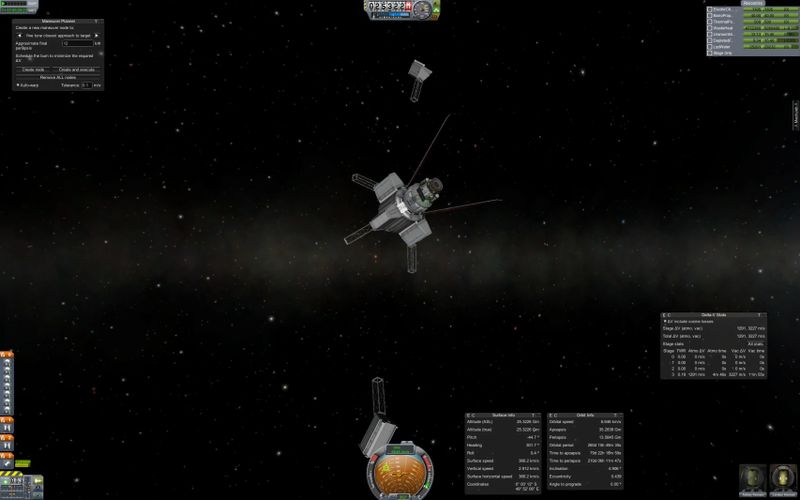 We were able to land fairly far out! I think this might be a moon of Jool. 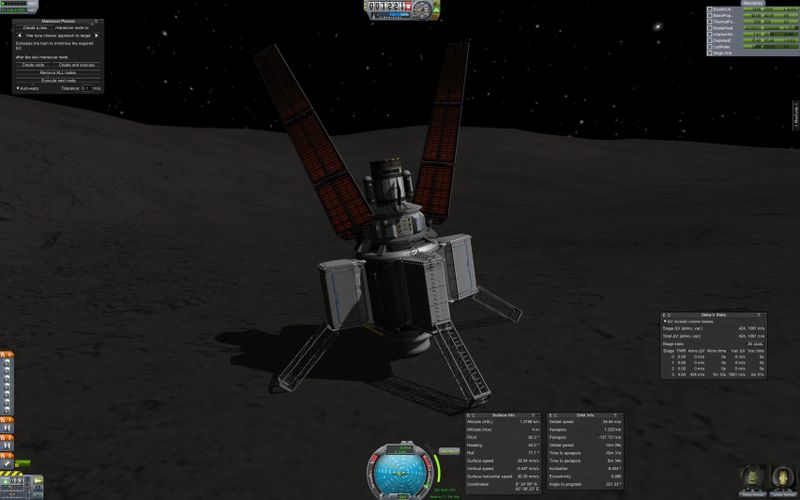 Unfortunately, we ran out of fuel on the return trip, which left Adtrey and Lemlan Kerman stranded out beyond Duna. In order to get the most out of their scientific findings, we had to return the full craft to Kerbin–not just the crew. An uncrewed rescue mission was launched. This one used traditional engines, because I was rather frustrated with the early-tech KSP Interstellar engines at that point. 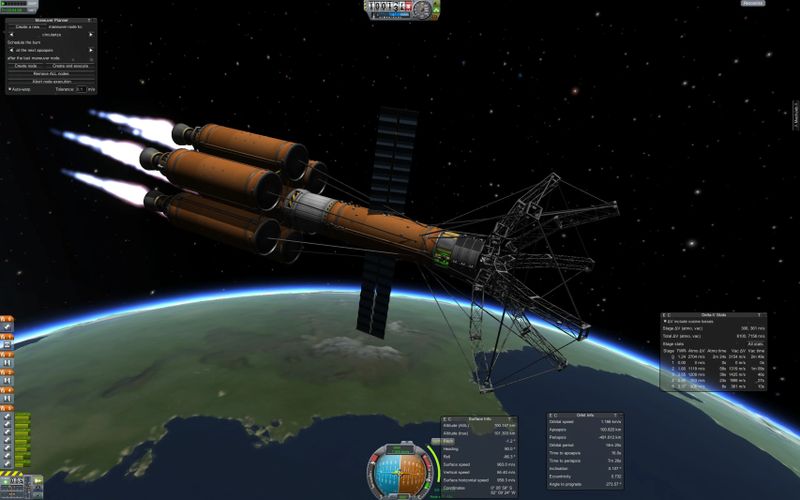 At this point I’d logged a few hundred manual intercept-and-docking maneuvers, and started using Mechjeb (an autopilot) to automate that process. It’s helpful to know how to do it by hand, because when Mechjeb screws up, you may need to recover manually. 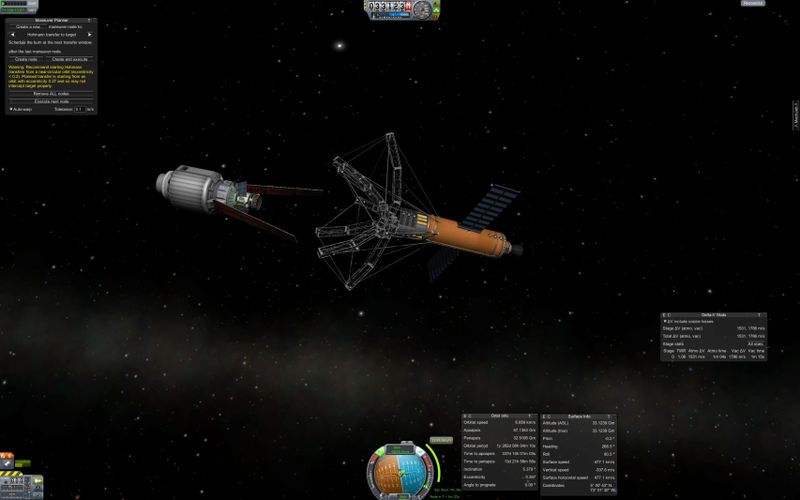 Amazingly, we managed to sieze the craft, orient ourselves in the rough direction of a burn for Kerbin, and get the craft headed that way. 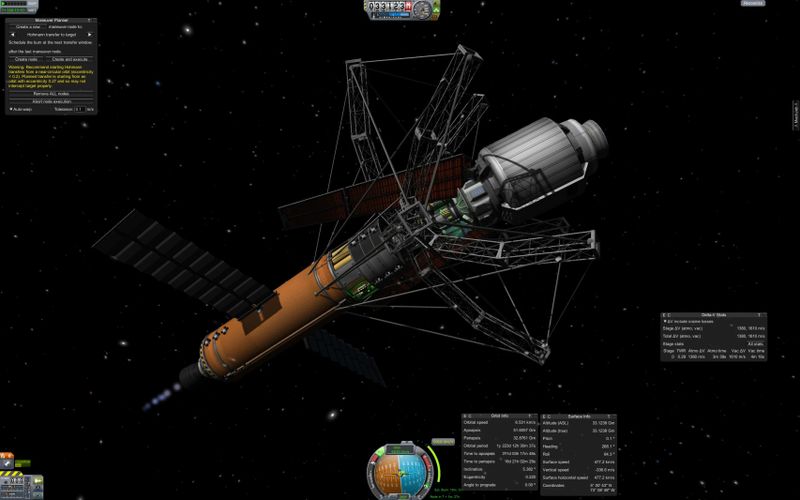 If you haven’t picked up on the theme yet, the recovery mission also ran out of fuel. We launched a rescue probe, this time with traditional KSP nuclear engines. 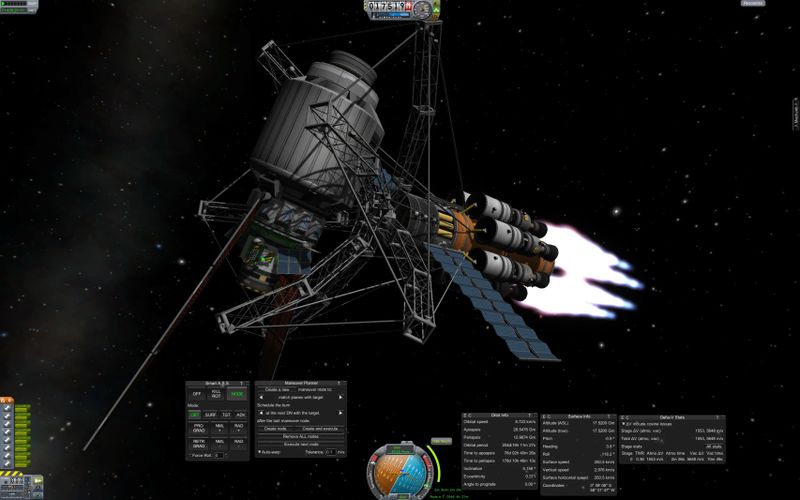 Hohman transfer this ain’t. This was before KSP had grabbers, so the rescued craft is just sitting, loose, in a steel basket while we try to push it back towards home. 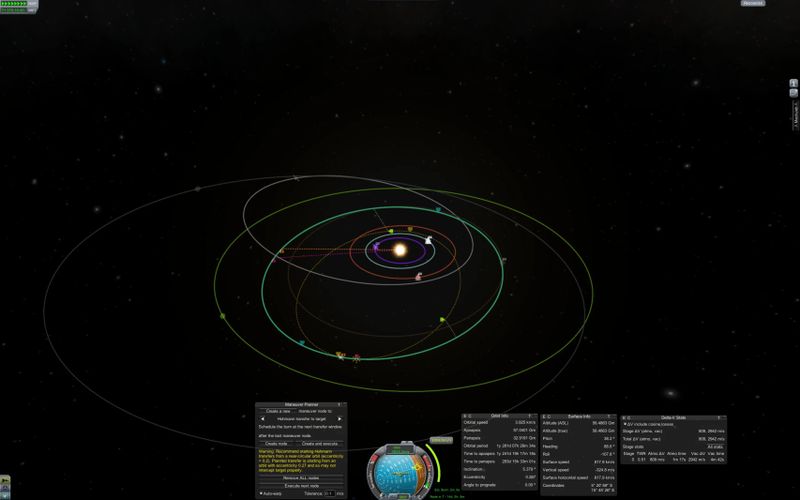 Amazingly, we managed to put the craft on an impact course with Kerbin. The radiators sheared off immediately on re-entry, leaving Adtrey piloting what is essentially a very heavy jar of uranium with a few scientific instruments and crew strapped on top.

Luckily, I’d learned the trick of adding Far More Parachutes than Anyone Thought Necessary, and the craft splashed down safely. 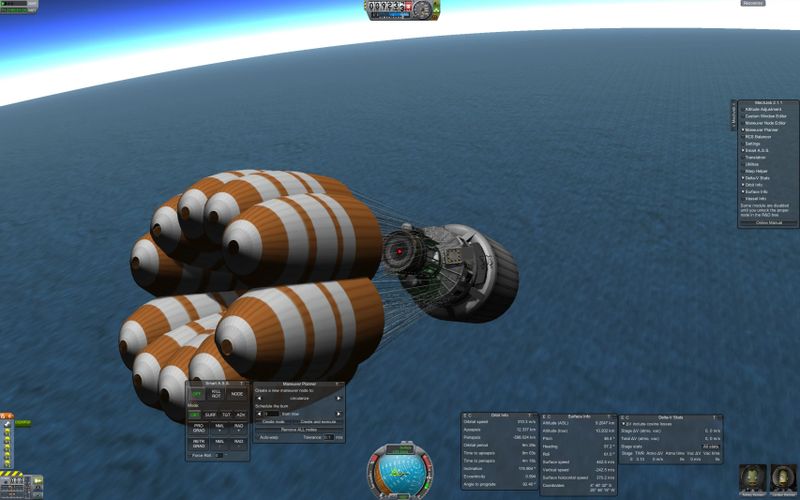 Frustrated with the whole thermal-rocket experience, and inspired by Blindsight’s Icarus station, I decided to revisit the microwave power problem. Up next: building extremely sparse Dyson spheres.

This entry originally appeared at aphyr.com/posts/347-kerbal-space-fuel-fiasco, and may be a summary or abridged version.