The State Department on Tuesday hit back at what it said were inaccurate press reports about US sanctions impeding the delivery of humanitarian aid to Syrians impacted by the devastating earthquake over the weekend.Assad regime officials and their allies, including Iran-backed 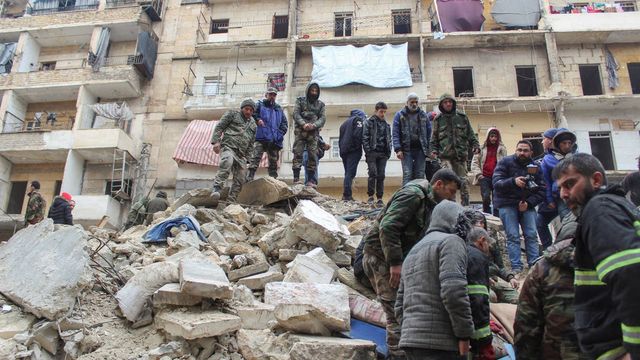 Egypt led the Middle East and North Africa in the number of venture capital deals last year, according to a report by MAGNiTT. Egypt’s overall economy continues to struggle.

Egypt led the Middle East and North Africa in the number of venture capital deals last year, according to a report by MAGNiTT. Egypt’s overall economy continues to struggle.

The search for survivors grows desperate as aid pours into Turkey, Syria

Umm Ibrahim was anxiously waiting for news of her seven children trapped since Monday under the rubble in Syria's second city, after a powerful earthquake that has killed thousands. Rescuers in Aleppo, Syria's pre-war commercial hub battered by years of conflict, scoured for

A leading Lebanese opposition MP recently delivered a petition to US officials signed by expatriates and local residents, calling for sanctions against Lebanon’s current and former officials who are obstructing investigations into the Port of Beirut blast.The letter, signed by 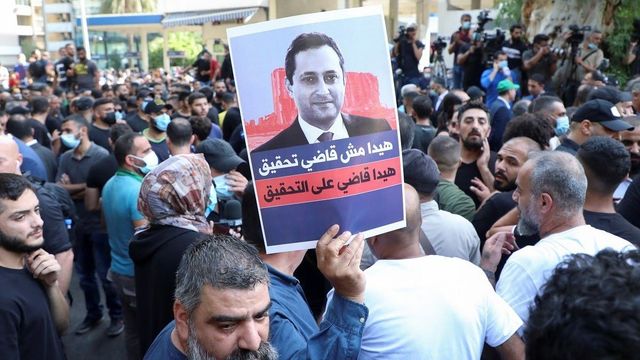 Saied said in a public address this week that opposition figures were a 'cancer' that could only be cured 'with chemicals'.

France 5 released a docuseries translating to ‘Hezbollah, the prohibited investigation’, which looks into the history of the Iran-backed group and its rejection of independent investigations into the 2020 Beirut blast.

UN Libya chief Abdoulaye Bathily’s meeting with the rogue military general is part of a recent tour of major figures across the country's political divides. 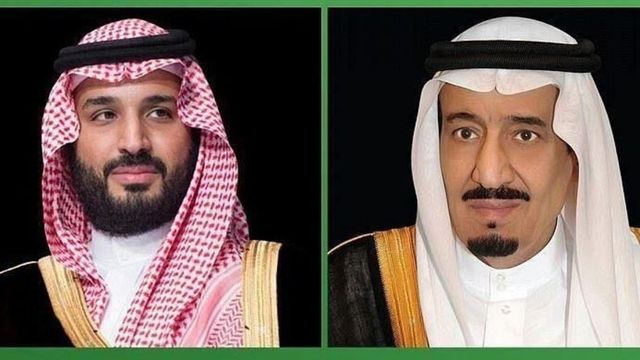 The United Arab Emirates on Tuesday pledged $100 million to Syria and Turkey, one of the largest sums yet following a massive earthquake that has killed thousands. Fellow Gulf country Saudi Arabia, which severed diplomatic ties with Syrian President Bashar al-Assad's regime in

The United Arab Emirates Tuesday pledged $100 million to Syria and Turkey, one of the largest sums yet following a massive earthquake that killed more than 5,400 people across both countries. The oil-rich Gulf nation -- which had already pledged some $13.6 million to Syria --

The health of Bernard Phelan, a French-Irish prisoner in Iran who last month suspended a dry hunger strike, is deteriorating, his sister told AFP on Tuesday. Phelan, a Paris-based travel consultant, was arrested in October while travelling and is being held in Mashhad in

President Erdogan says there are more than 53,000 rescuers in the 10 provinces, but locals complain that some neighborhoods are abandoned as hopes run out for people trapped in the debris.

President Erdogan says there are more than 53,000 rescuers in the 10 provinces, but locals complain that some neighborhoods are abandoned as hopes run out for people trapped in the debris.

A lawmaker from Turkey's ruling party was reported dead in the country's south after the devastating earthquake.

Rescuers pour into Turkey, but aid slow to arrive in earthquake-hit Syria

The disaster response in northern Syria is stymied by supply chain issues, logistical hurdles and diplomatic disputes over accessing the country's rebel-held territory.

The United Arab Emirates Tuesday pledged $100 million to Syria and Turkey, one of the largest sums yet following a massive earthquake that killed more than 6,256 people across both countries.The Gulf nation – which had already pledged some $13.6 million to Syria – is 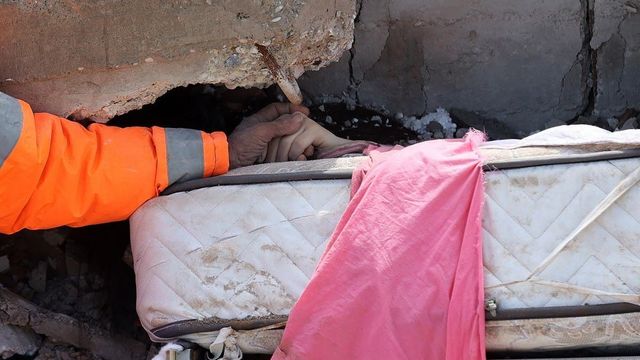 Iran has revealed an underground air force base called 'Eagle 44' - which is big enough to house fighter jets.

A Syrian opposition official said Turkey gave guarantees that it would leave northern Syria once a political deal with the regime was reached.

Turkey’s Ashkenazi rabbi, Rabbi Mendy Chitrik said that he tended to community members who were in distress and lacked shelter, adding that ‘fortunately we were able to get twelve people out and bring them to Istanbul’

Hamza Ashqar was killed with a live bullet in the early hours of Tuesday, making his death the second Palestinian from Nablus killed by Israel since the beginning of the year, and the 42nd in the occupied West Bank, including nine children.

Scenes of chaos prevailed in Antakya on Tuesday as the emergency response to Turkey’s deadly earthquake began.

The Iraqi dinar has been depreciating against the dollar amid restrictions from the US Federal Reserve and other issues.

Iran shows off underground air base with Russia's Sukhoi jets

In the first public display of an underground air base, Iran presented missile-mounted warplanes and bombers at a moment of growing concerns over its controversial drone deliveries to Russia.

Three Israeli rescue delegations are already on the ground, with more humanitarian aid expected in the coming days.

Three Israeli rescue delegations are already on the ground, with more humanitarian aid expected in the coming days.

French Islamophobia is a by-product of its national identity

Violent incidents of Islamophobia are going unnoticed in France. Shielded by an apathetic justice system and a national psyche unfazed by xenophobia, Muslims are increasingly concerned about their place, security and fate in modern-day France.

What to expect from Biden's State of the Union address?

"If he goes short, it doesn't give them too many points to go after. People are waiting for one stumble and one word out of place," Patrick James, professor of international relations at the University of Southern California, told The New Arab.

An earthquake that has killed more than 5,000 people in Turkey and its southern neighbour Syria is proving a diplomatic headache for those seeking to channel aid to Syrians. Still gripped by more than a decade of civil war, Syria is divided into areas controlled by the

Trailblazer Sally Azar is hoping that her role as the Holy Land's first Palestinian woman pastor will inspire other women to reach for influential positions in religious and political life. Wearing her clerical collar and with clasped hands before an altar at the Lutheran

The devastating earthquake around the Turkish-Syrian border struck an area that is home to millions of refugees already battling desperate circumstances. The United Nations said Tuesday that it was trying to reach refugees affected by the 7.8-magnitude quake, though its

Iraq revalues currency to reset exchange against the US$

Iraq's cabinet approved a currency devaluation and set the exchange rate at 1300 dinars per US dollar.

President Joe Biden will seek to lift the spirits of a tense nation on Tuesday with a State of the Union address showcasing his efforts to rebuild the US economy and resolve critical health and foreign policy issues.

Architectural heritage dating back thousands of years has been damaged and destroyed by the series of earthquakes that shook Syria and Turkey on Monday.

Analysis: The far-right politician's latest anti-Muslim stunt has heightened a geopolitical drama with Turkey over Sweden and Finland's NATO membership.

In search of Iranian food in Tokyo

Yalla! Let's Eat: Nestled deep within the sprawling streets of Tokyo is an enticing, nourishing Persian restaurant called BolBol. For one Iranian expat, the welcoming presence of Iranian food culture abroad conjures up feelings of pride and comfort.

At least 20 people died when fighting broke out between security forces and clan members in Somaliland, said the UN on Tuesday.

In Turkey, questions about country's preparedness after massive earthquake

Only 0.5% of spending from the central government budget last year went to programs related to urban improvements and disaster management in quake-prone Turkey.

Man sets himself on fire outside Morocco consulate in Spain

A man set himself on fire outside the Moroccan consulate in Spain on Tuesday.

Extended family members pulled a newborn baby alive from the rubble of a home in northern Syria, after finding her still tied by her umbilical cord to her mother, who died in Monday's massive quake, a relative said. The infant is the sole survivor of her immediate family, the

Afghanistan's LGBTQ+ may prefer death to life under Taliban

Minority freedoms have been crushed since the Taliban returned to power, none more so than the country's LGBTQ+ community. Faced with brutal violence by the authorities and suspicion from the wider community, many are forced to flee or enter hiding.

US CIA director Bill Burns said Tuesday that the current situation in Israel and the Palestinian Territories has a "very unhappy resemblance" to the second intifada.

Iran's army on Tuesday unveiled its first underground base for fighter jets designed to withstand possible strikes by US bunker-busting bombs, state media reported. The base -- named Oghab 44 ("Eagle" in Persian) -- can accommodate "all types of fighter jets and bombers, in