NAIROBI, Kenya (AP) — Eritrea’s president in rare public comments has dismissed as “a fantasy” allegations that his country’s forces carried out rape, looting and other abuses in the war in neighboring Ethiopia’s Tigray region.

LONDON (AP) — Twitter failed to provide a full report to the European Union on its efforts to combat online disinformation, drawing a rebuke Thursday from top officials of the 27-nation bloc.

Is the Biden administration late to WWIII?

On Jan. 7, 1943, President Franklin Delano Roosevelt delivered his State of the Union address to the 78th Congress. The world around him and the country he led were at war and his speech overtly reflected the existential challenges facing the Western democracies under assault

ATHENS, Greece (AP) — Greece’s parliament has banned a far-right political party led by a jailed former lawmaker from participating in the general election later this year. Parliament published the text of a legislative amendment Thursday that will disqualify the Greek National Party on the grounds that its leader has been convicted of a serious criminal offense.

Lawmakers gather for roasts, ribbing at annual dinner: 'It only goes downhill from here, people!'

It was a bipartisan food fight of sorts, as lawmakers on both sides of the aisle roasted and ribbed each other — and dropped at least one F-bomb — at the Washington Press Club Foundation’s annual Congressional Dinner. “Did you watch [Kevin] McCarthy [(R-Calif.)] during the

Editor’s note: The Hill’s Morning Report is our daily newsletter that dives deep into Washington’s agenda. To subscribe, click here or fill out the box below. House conservatives on Wednesday tried to cast President Biden and fellow Democrats as the swaddled darlings of Twitter

Two decades before Chris Miller became then-President Trump's acting Defense secretary, overseeing the Pentagon as an insurrection played out in Washington, D.C., he was on a C-17 airplane headed out of Iraq, shortly after U.S. forces had captured Baghdad. By June 2003, Miller

Trump Gives DeSantis a Taste of His Own Medicine

Sorry to everyone who wanted more time, but the 2024 presidential election began in earnest on Tuesday. Joe Biden delivered a searing State of the Union address that laid out the themes of his reelection campaign: He used his time in office to make the economy better and 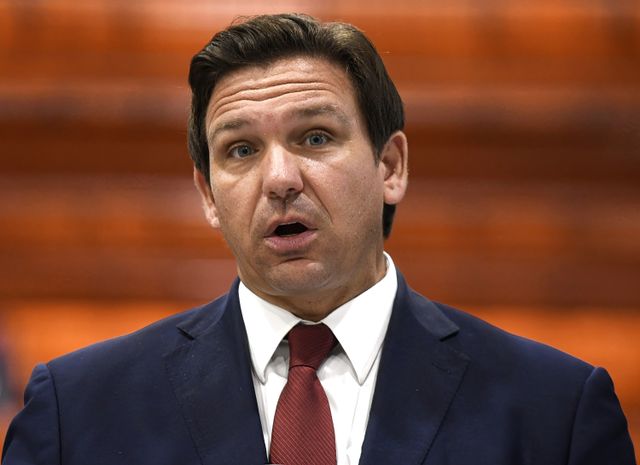 Rep. Tony Gonzales (R-Texas) represents more than a third of the U.S.-Mexico border, and he wants everyone to know that immigration policy and border security are two separate issues. "Republicans and Democrats fall into this trap, where they mix the two. Border security and

The Democrats Lost the House by Just 6,675 Votes. What Went Wrong?

Even now, the glories of Election Night 2022 shimmer in memory as smug predictions of a first-term curse afflicting Joe Biden and the Democrats took it on the chin. The Senate was saved with every Democratic incumbent reelected, and John Fetterman victorious in the Land of Oz. 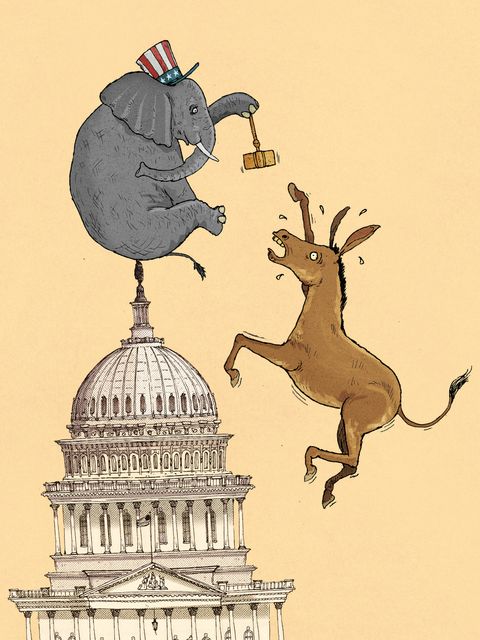 South Carolina is emerging as an early battleground in the Republican presidential primary as a parade of potential White House hopefuls zeros in on the Palmetto State. Former President Trump traveled to Columbia last month to roll out his South Carolina leadership team, while

1 The snake was a fall guy. That tree was temptation enough. Staged apples, drop-dead gorgeous. 2 “Not in my body!” they shout. Benzene in the shampoo lead in the water; pesticide in fruit. They mean the new vaccine, but isn’t there more to it? Water on fire; neonicotinoids in

Progressives Saw Ron Klain as Their Line to the White House. What Now?

Last Thursday, outgoing White House chief of staff Ron Klain, President Joe Biden, and Klain’s successor Jeff Zients took the stage in front of a crowd of White House staffers, family members, and reporters in the East Room. The gathering was a farewell event for Klain, who,

The housing crisis is insane. None of its dysfunctions are exclusive to the United States, but the country has a talent for making them hideously manifest. In Oakland, Moms 4 Housing, a group of formerly homeless mothers of color, staged a protest over rising prices. For

House Republicans Want to Take Away D.C.’s Right to Govern Itself

Nearly 700,000 people live in Washington, D.C., which makes it more populous than at least two of the Union’s states. Unlike the people of Wyoming and Vermont, though, D.C. residents only have a partial form of self-government . But the return of a Republican majority in the

GOP divided over whether heckling Biden hurts them

House Republicans are divided on whether the raucous heckling of President Biden during his State of the Union address on Tuesday night was inappropriate — or whether it helped them effectively communicate their position to the American public. Many Republicans thought the

Florida Gov. Ron DeSantis is on the cusp of making a final decision on a 2024 presidential run. Several Republicans familiar with the deliberations say that DeSantis is almost certain to seek the GOP’s presidential nomination. His advisers have begun reaching out to and

Growing scrutiny of the spouses of Supreme Court justices is now raising calls for more stringent ethics rules governing the judges and their families. The latest example of a judicial spouse winning unwanted attention is Jane Roberts, who is married to Chief Justice John

President Biden as a freshman senator in 1975 introduced a bill that would have limited budget authority for all federal programs to between four and six years, which experts say would have required new legislation to fund Medicare, Social Security and other federal programs.

American personal protective equipment (PPE) companies are forming a lobbying group to push the U.S. away from buying Chinese-made masks, gowns and gloves. The American Medical Manufacturers Association aims to boost domestic production of PPE to ensure that the U.S. never has

Rescuers pulled more survivors from beneath the rubble of collapsed buildings Thursday, but hopes were starting to fade of finding many more people alive more than three days after a catastrophic earthquake and series of aftershocks hit Turkey and Syria, killing more than 17,000.

CAPU MIDIA, Romania (AP) — U.S. and French troops that are part of a NATO battlegroup in Romania will hold a military exercise on Thursday to test the 30-nation alliance’s eastern flank defenses, as Russia’s full-scale invasion of neighboring Ukraine nears its one-year anniversary.

Supreme Court might have easy outs on elections, immigration

WASHINGTON (AP) — The Supreme Court soon could find itself with easy ways out of two high-profile cases involving immigration and elections, if indeed the justices are looking to avoid potentially messy, divisive decisions.

Zelenskyy wraps up European tour with visit to EU summit

BRUSSELS (AP) — Ukrainian President Volodymyr Zelenskyy was wrapping up a whirlwind tour of his major European backers on Thursday, seeking assurances that Ukraine could one day become part of the European Union.

BEIJING (AP) — China on Thursday said U.S. accusations that a downed Chinese balloon was part of an extensive surveillance program amount to “information warfare against China.”

CANBERRA, Australia (AP) — Australia has for the first time rejected a coal mining application based on environmental law.The government is under pressure to curb climate change by blocking all new coal and gas extraction projects.

NEW DELHI (AP) — India’s government-run animal welfare department has appealed to citizens to mark Valentine’s Day this year not as a celebration of romance but as "Cow Hug Day” to better promote Hindu values.

US general to aggressors: Allies are battle-ready in Asia

MANILA, Philippines (AP) — American forces and their allies in Asia are ready for battle after years of joint combat exercises, a United States general said Wednesday, adding that Russia’s setbacks in Ukraine should serve as a warning to potential Asian aggressors like China and North Korea.

WASHINGTON (AP) — With an eye toward the 2024 campaign, President Joe Biden on Thursday ventures to Florida, a state defined by its growing retiree population and status as the unofficial headquarters of the modern-day Republican Party.

WASHINGTON (AP) — President Joe Biden sparked a firestorm in energy circles when he said in Tuesday's State of the Union address that the United States will need oil “for at least another decade.″

Passport rush blamed on US policy stalls adoptions in Haiti

SAN JUAN, Puerto Rico (AP) — Dozens of children are stuck in orphanages across Haiti, unable to leave the increasingly volatile country and start new lives with adoptive parents because a U.S.

CANBERRA, Australia (AP) — Australia’s Defense Department will remove surveillance cameras made by Chinese Communist Party-linked companies from its buildings, the government said Thursday after the U.S.

SEOUL, South Korea (AP) — North Korean leader Kim Jong Un and his young daughter took center stage at a huge military parade, fueling speculation that she’s being primed as a future leader of the isolated country as her father showed off his latest, largest nuclear missiles.

President Joe Biden’s calls in his State of the Union speech for strong criminal penalties in response to soaring deaths linked to the potent opioid fentanyl are being rebuked by harm reduction advocates who say that approach could make the problem worse, even as some in Congress jeered the comments and blamed the Democrat’s border policies for deepening the crisis.

HELENA, Mont. (AP) — Montana schools would not be able to punish students who purposely misgender or deadname their transgender peers under a Republican-backed legislative proposal that opponents argue will increase bullying of children who are already struggling for acceptance.

President Biden on Wednesday said that Russian President Vladimir Putin has "already lost Ukraine," adding that aid to Ukraine during the Russian invasion is open-ended. “There’s no way that Putin is going to be able to — he’s already lost Ukraine,” Biden said. “He thought that

The Congressional Asian Pacific American Caucus endorsed Julie Su, the Deputy Labor Secretary, to be the next Labor Secretary on Wednesday. Current Labor Secretary Marty Walsh is expected to leave the Biden administration in the coming days to lead the National Hockey League